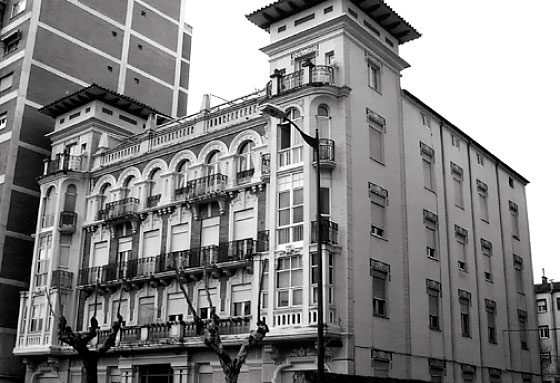 1. PEÑA HOUSE
I leave my house and feel
this musical tenderness of the sky.
The Flight of Celebration 1

Claudio Rodríguez was born on January 30th, 1934 in 51 Santa Clara Street, at the corner of Alfonso de Castro Street, in a building long ago demolished. While still a child, his family moved to the “American’s House” or “Peña House”, commissioned by José de la Peña to the architect Antonio García Sánchez-Blanco in 1931, on his return from Mexico. He spent his adolescence in this beautiful building of colonial and eclectic style and lived there until 1951, when he moved to Madrid to start his university studies. 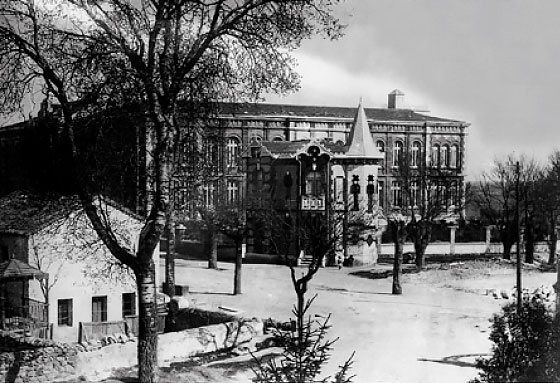 As if it had never been mine,
give my voice to the air and in the air
Let it be everyone’s and let them all know it
Gift of Inebriation

The construction of this magnificent building started in 1902, although the academic activity did not begin until 1919, due to the political instability at that time. It is a splendid building in historicist style. Claudio Rodríguez commenced his High School studies there in 1944. There he met two teachers form whom he always kept fond memories: Mr. Ramón Luelmo, a Literature teacher to whose first attempts to carve language he is indebted, and Mr. José María Gómez López, a Philosophy teacher, who introduces him in the philosophical readings that will later shape his poetic thought. While attending this high school he started writing his first book, Gift of Inebriation. 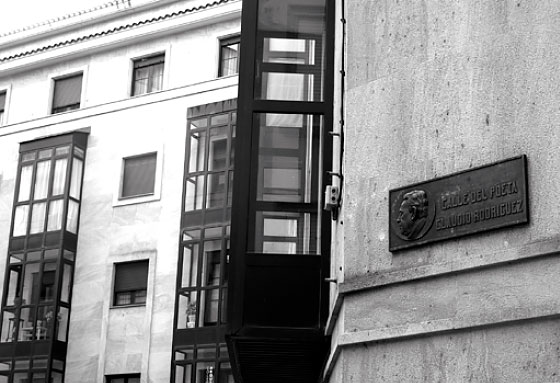 3. CLAUDIO RODRÍGUEZ STREET
What are you doing around this Street,
here, in the Street of my adventures?
Conjurings

On his January 28th, 1994 session, the Council of Zamora “agrees to dedicate a street to the Zamoran poet Mr. Claudio Rodríguez, as acknowledgement to his poetic qualities and merits”.

This new street is located between the Castile and Leon Square and the Pelayo Street, and it was a usual play space for the child Claudio and his friends. 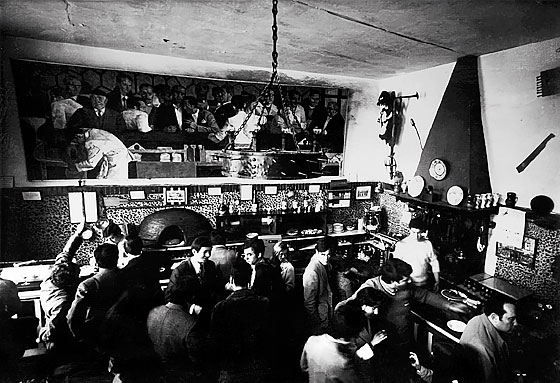 Always on leaving we think
of the distance, never
of the company. And any place is a good one
To make Friends.
Alliance and Condemnation

In this painting, Antonio Pedrero immortalizes relevant individuals who were regulars in his parents’ bar, The Swallow, among whom Claudio Rodríguez appears surrounded by his friends. From left to right we can find 22 characters: Martín de la Iglesia “El Músico”, Manuel Sevillano, Gregorio Matilla, Eduardo Pedrero, Claudio Rodríguez, Ramón Abrantes, Julio Mostajo, Fernando Pardal, Miguel “El Curro”, “El Chivín”, Ángel “Cacabelo”, Juanito “El Chuleta”, Paulino “El Pirata”, Virgilio Pedrero “Lili”, Lázaro Moreno “EL Zapatero”, Andrés “El ciego” and his guide Eulogio “El Pisculi”, Antonio Baladrón, Miguel Cerrón and Luis “El Sordo”. A singular human group of Zamora captured by the artist while he was at work in the bar. He finishes the painting on December 1960 and it is hung on a wall at the bar, what provoked a flow of visitors during the first weeks of 1961.

The picture was later purchased by the bank Caja España. 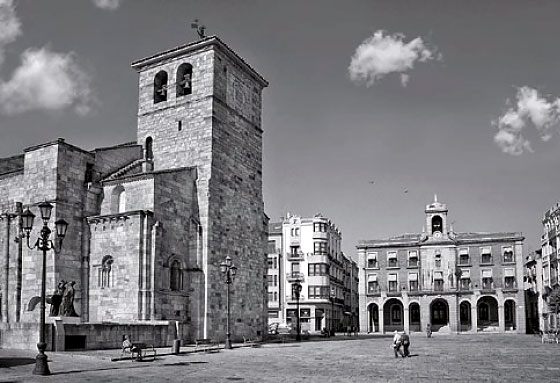 What are you doing? What are we all doing
in the middle of the Marketplace at this time of the day?
Conjurings

Claudio Rodríguez always sung to the solidarity of man. The Main Square helps him discover the men “from the good land” (countryflok) as opposed to those “from the evil land” (townsfolk). Social falsehood is one of his concerns, more evident in the book Conjurings, where he takes a critical stance. The Main Square, the habitual place for weekly markets and witness to “The Contract of Young Men” in mid. twentieth century, caused a strong impression in him. Always on the side of the humblest, in this poem he exclaims: “Contract, / servile exchange, theatre of dishonour.” 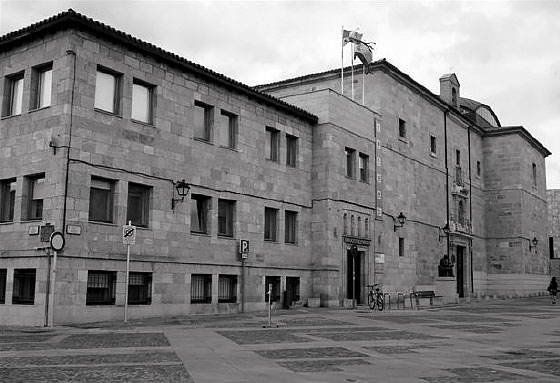 When all has gone, when I have gone,
This gaze will remain,
The one that asked and gave, without time.
The Flight of Celebration

This was the former House of Culture, built in 1975 by Julián Gutiérrez de la Cuesta and renovated in 2002 by Emilia Checa, Javier Lorenzo e Ignacio de las Casas as a Public Library. It hosts the Claudio Rodríguez Permanent Seminar since 2004. Part of Claudio Rodríguez’s original oeuvre is kept there, as well as other documents related with his life. All this valuable, timeless material is available for any person interested in it. 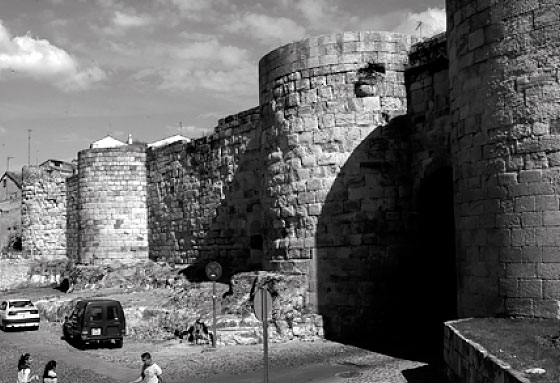 Here I am before your walls
Border town which always
The heavens constantly unnerves.
Alliance and Condemnation

Claudio always carried his town in his memories and described it from his deepest feelings. However, as time went by, he became disappointed with it and looked for an open, wall-less town, where light and air could penetrate and enlighten its inhabitants. The walls conform the bastion that allows for light beheld from the high plain, an open-field land. 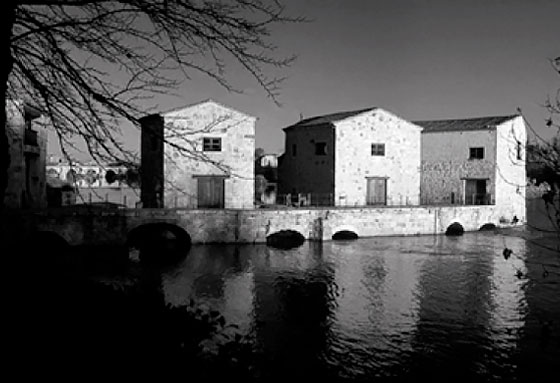 You, river of my land, you, Enduring river.
Conjurings

Claudio Rodríguez’s constant strolls along the river Duero led to its idealized image. Its rumor accompanied him throughout his whole life, was witness to the simplicity, voice and pulse of its folk. That is why the poet asks, in case one day he forgets about the river because of solitude, injustice, wine, indifference or despondency, for the river to hold him, to become Dudarero (timeless). The water mills at Olivares are one of his favorite places to hear the rumor of the river.

And as I saw
I was so popular among the streets
I crossed the bridge and, farewell, I left all behind.
Conjurings

Claudio Rodríguez called himself a “wandering poet”. He loved nature and solitude. He observed the farm laboring at the family’s property during his childhood and youth, what influenced in his attention to nature and his contemplative stance. Walking out into the open fields was a way of seeking solace, of letting time control go. The stone bridge was the threshold giving way to the truth of the fields. 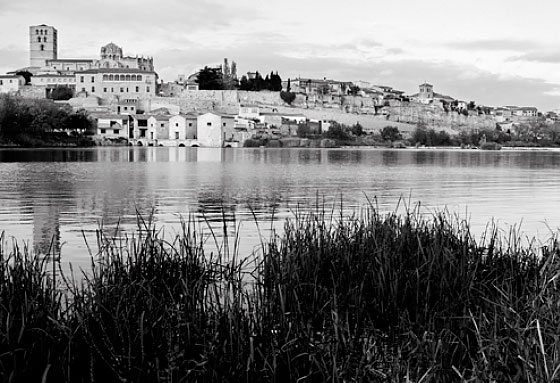 The first town ordinances that forced tanners to work outside the city walls, due to the stink of their labor, were passed in the fifteenth century, although they were not in full force until the sixteenth century. The tanneries, especially for tasks such as the “apelambrado” (skinning), became a bank job. To that end, small pools called “pelambres” were used in which the furs were submerged, being the best-known installations those of San Frontis. Although nowadays they only exist in our memories, Claudio Rodríguez liked visiting this place, from where he beholded his “soultown”.

INFORMATIVE LEAFLET OF THE LITERARY ROUTE