Claudio Rodríguez was a fine observer of reality. He did it while walking and strolling. As a wandering poet, he cherished solitude, though shared from a strange sensibility: that of the lonely one who contemplated his own town as a way of finding peace, the calm that life sometimes denied him.

In his walks, he also prompted the encounter with his townsfolk and his town. The latter, as he used to say, welcomes and accuses us.

“When all has gone, when I have gone, / This gaze will remain, / The one that asked and gave, without time”
, he says in The Flight of Celebration.1

The Claudio Rodríguez Permanent Seminar aims to relate that timeless gaze to the literary route through the places that Claudio inhabited. Such places are either reflected or have left a deep mark on his life and oeuvre.

He was born in Zamora on January 30th. He was named Claudio Valentín Francisco.  His family and friends called him “Cayín”. He used to stay at his paternal grandmother’s property, very close to the town, in contact with nature and farm work.

He attends the Claudio Moyano High School. The influences of Mr. Ramón Luelmo, who teaches Literature, and Mr. José María López, who teaches Philosophy, are decisive. At home, he receives the first literary stimuli. His father is a great reader of poetry.

On March 23, his father dies suddenly.

“I’ve never had a family life. My father’s death, a difficult relationship with my mother, who was very young… nor could I have a very close relationship with my sisters, being eleven years their elder. So, I’ve always been very lonely, and I believe that has had a decisive influence on my poetry. I lacked a firm grip”.
1949

He reads the Greek philosophers and the Spanish mystics. He reads Rimbaud in French.

He starts writing Don de la ebriedad (Gift of Inebriation). In October, he moves to Madrid to study Arts at the Central University. 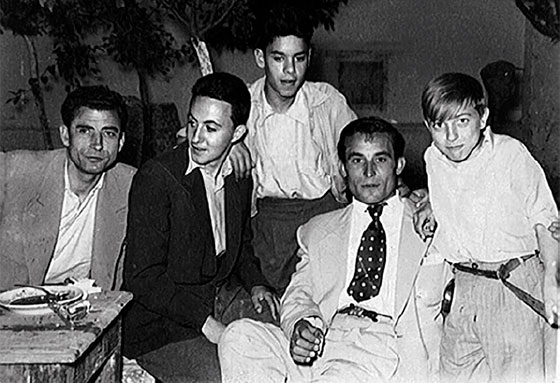 His mother forces him to enroll in the School of Law (University of Salamanca). He gives up his studies definitely after passing some subjects.

During a university trip to Granada, he meets Clara Miranda, his wife. He sends Vicente Aleixandre the manuscript of his first book, Gift of Inebriation. They meet shortly after in the famous house at 3 Velintonia Street. Their relationship will last until Aleixandre’s death in 1984.

“I was lucky to make a deep friendship, an almost filial one, to put it in some way, with Vicente Aleixandre. However, that is not as important in the literary as in the personal aspect. I visited him almost three times a week or more. And it was there where I related more closely to other writers such as Carlos Bousoño, José Ángel Valente, Francisco Brines, and Ángel González. In any case, these were friends who did not have to do specifically with literature. I have no idea of what the literary world is”.
1954

Gift of Inebriation is published, which turned out to be a surprise and an event. During the summer, already in Zamora, he makes friends with Blas de Otero, with whom he takes long walks through the city and along the river. The poem “Blas de Otero in Ramon Abrantes’ Workshop” written in memory of these days.

In Madrid, he takes part in the students’ revolts between February 1st and 9th, which resulted in his arrest and subsequent police surveillance in Zamora.

He graduated in Romance Philology at the Central University of Madrid. His minor thesis, directed by Rafael de Balbín Lucas, is entitled El elemento mágico en las canciones de corro infantiles castellanas [‘The Magical Element in Castilian Ring-around-the-rosey Children Songs’]. In December, Gift of Inebriation is given the Adonáis Award. He was just nineteen years old and was earning a degree in Arts. 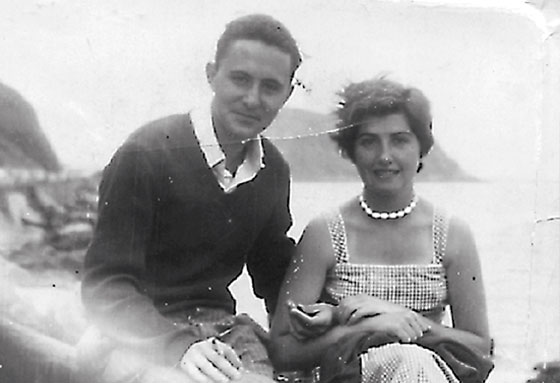 He moved to Nottingham as a lector in Spanish, thanks to the help of Dámaso Alonso and Vicente Aleixandre, where he remains until 1960. He was fully engaged with teaching at the university and came into contact with the great English Metaphysical and Romantic poets. In November, his second book, Conjuros (Conjurings), appears. It is dedicated to his friend and mentor Vicente Aleixandre.

He marries Clara Miranda in Madrid on July 23. The “Cla-Cla”, as José Olivio Jiménez calls them, will spend their first years of marriage in England.

End of Academic Course with his students. The University of Nottingham, 1959.
1960

He settles at Cambridge University as a lector in Spanish until 1964. His friendship with the poet Francisco Brines, a lecturer at Oxford, was became closer.

On his return from Cambridge, he settles in Madrid, determined to devote himself to university teaching, poetry and his friends.

He teaches Spanish Literature at the International High School on Miguel Ángel Street and, occasionally, at the Complutense University.

Critic Award for Alliance and Condemnation
He starts translating T.S. Eliot into Spanish commissioned by a Spanish Publisher; however, these versions will never be published. 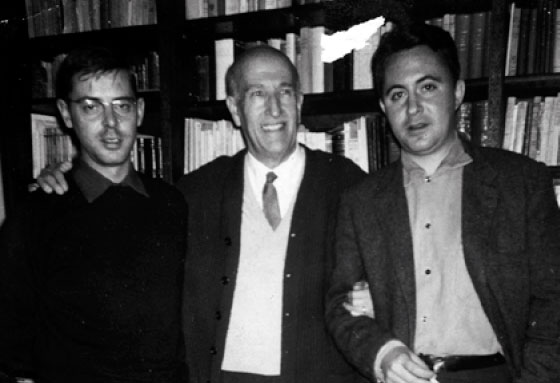 He returns to Zamora to give a lecture at the School of Education.

He is awarded a grant from the Juan March Foundation, which allows him to work on his new book El vuelo de la celebración (The Flight of Celebration).
His mother’s death, with whom he had a difficult relationship, together with that of his sister, shape the writing of his new book.

In December, the Modern Language Association of America (MLA) celebrates the session entitled “In Honor of Claudio Rodríguez”, in Houston, Texas.

He publishes Desde mis poemas (From my Poems), a compilation volume including all his oeuvre, bestowed with the National Poetry Award.

With José Hierro (on the right, standing) and Vicente Aleixandre (seated)
1985

He publishes Reflexiones sobre mi poesía (Reflections about my Poetry).
He takes part in the Conference Words for a Time of Silence in Granada, dedicated to the poetry and novel in the 50s. “What marked our generation is friendship, but everyone wrote what he wanted. Perhaps, we were just linked by the importance each one gave, in his own style, to the quality of language or to poetic skill. We were also joined by the same ethical postulates facing certain historical circumstances. Such postulates were not necessarily political”.

Literature Award of Castile and Leon.

He collaborates with the ABC newspaper.
The city of Salamanca names a square after him.
On December 17th, he is elected a permanent member of the Royal Academy of the Spanish Language. He occupies the chair left vacant by Gerardo Diego. This was suggested by Carlos Bousoño, Emilio Lorenzo, and Manuel Seco.

He publishes Casi una leyenda (Almost a Legend).
Twenty-four critics consider it the book published in Spain that year.
The Critic Award for Almost a Legend.

On March 29, he read his admission speech into the Royal Academy of Spanish Language entitled Poesía como participación: hacia Miguel Hernández (‘Poetry as Participation: towards Miguel Hernández’). The reply speech is read by Carlos Bousoño, his friend and one of the first scholars of Rodríguez’s oeuvre.

He is appointed trustee of the Cervantes Institute.

He is elected member of the Poetry Academy of Castile and Leon.

He is invited to the I Meeting of European Poetry at the Students’ Hostel.
Poetry Award of the Poetry Academy of Castile and Leon due to his oeuvre.

He dies in Madrid on July 22 and was buried at the Atilano Cementery in Zamora.

Aventura (Adventure), a book collecting his posthumous poems, is published.